Mansfield Homes and Condos for Sale

Though primarily in Tarrant County, parts of the suburban city of Mansfield, Texas, are also found in Ellis and Johnson counties. Mansfield is a small city in the Dallas-Fort Worth Metroplex located equidistant to Forth Worth, Dallas and the Dallas Fort Worth Airport. Home to approximately 62,300 residents, Mansfield was named the 17th best place to live on CNN/Money Magazine’s 2014 list. Mansfield also made the “Best Places to Live” list in 2007, 2009 and 2012.

Mansfield is composed of 36.4 square miles, 0.04 of which are water. Because of its great location near State Highway 360, U.S. Route 287 and Farm Road 157, Mansfield is able to provide its residents with quick and convenient access to great entertainment, recreation, shopping and dining. Popular Mansfield attractions include the Farr Best Theater, Big League Dreams, the Mansfield Historical Museum, Hawaiian Falls Water Park, an 80 acre nature park and eleven parks with 3.5 miles of trails, the Mansfield National Golf Course and Walnut Creek Country Club.

If you would like more information regarding homes for sale in Mansfield, Texas, please do not hesitate to contact us today.

Courtesy of Compass RE Texas, LLC

Wonderful gated property on an acre of land in the highly sought after Mansfield ISD with room for horses and plenty of trees. Great family home or ideal for a home-based...

Courtesy of Compass RE Texas , LLC

This is a great home that features three bedrooms, two bathrooms with a welcoming back yard and covered patio for entertaining. Bring your buyers and investors quick beca...

This gorgeous home is on an oversized corner culdesac lot in highly sought after Walnut Creek Estates. NO HOA! The backyard is big enough for a pool or big get together w...

STOP THE CAR! CUSTOM home in Walnut Creek Estates.No HOA.This is a one entrance in, one exit out subdivision Surrounded by WALNUT CREEK COUNTRY CLUB (pecan) Golf Course ....

**Two Huge Master Bedrooms*** Both with on suite full baths and walk in closets. One master on the first floor and one master on the second floor. Second bedroom also lo...

Courtesy of RE/MAX Associates of Arlington

Gorgeous open floor plan of 4 bedroom, 2.1 bathrooms, 4 living areas and a formal dining room which can be used as a flex space. Located in desirable Heritage Estates. Am...

Looking for the perfect home in the perfect place? Chances are you'll want to check here first. 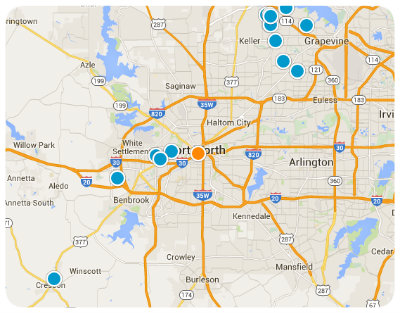